5 common reasons for calling a locksmith 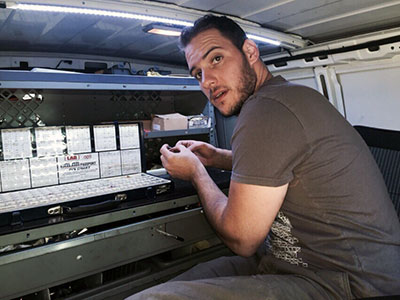 If someone told you that they worked for a locksmith company, you would probably suppose that aside from people with an interest in complex mechanisms, being an emergency locksmith is not exactly the most exciting job out there. Here are a few scenarios that all locksmiths have to face at some point in their careers, which will make you see them in a different light.

Nobody likes to wake up in the middle of the night to a drunken phone call. But for a locksmith, it’s part of the job. Going out to see people at two in the morning who couldn’t get into their house or car (sometimes because it’s the wrong house or car) is often what constitutes an emergency, right up to the point where the lost key is found in a purse or glovebox.

Locksmiths are often the unwilling bystanders to wives who have locked out husbands and vice-versa. One has even reported a man calling him three hours after he had done a lock change for the man’s wife. Most locksmiths would agree, that besides people losing their keys, this is one of the most common reasons for being called out by couples.

3. A nasty smell from a missing tenant’s room

One of the worst things to deal with as an apartment locksmith is the call that says nobody has seen a tenant for weeks, and their room is starting to smell.  While you would hope that normally the case is the discovery of rotting food from a broken fridge, sometimes it could be the worst thing you could imagine.

4. Working with the police

Don’t worry, it’s not so that they can get into your house and search the place while you’re away. Police have often asked locksmiths to gain entrance to empty rooms that they can set up small operations in if they need to stay near a certain area, or to gain access to a crime scene. A lot of locksmiths are helping the police in this way. Whether that should be considered legal or not, well, that’s not what this article is about.

5. Locked your keys in the car or house

This is perhaps the most common reason to be called out. Incidentally, just about every time a locksmith arrives at the scene, a window or door has been tampered with because the owner tried to get in by themselves. Unlocking a car door or that of a house is not an easy task, and an amateur usually does more harm than good when they try.

Locksmith Willowbrook, 630-425-6731, Kingery Hwy, Willowbrook, Illinois, 60527, https://www.locksmithwillowbrookil.com/
We perform our services through a network of independently owned and operated affiliates.